Lime kilns, associated tramways, structures and other buildings at Llanymynech

This monument is scheduled under the Ancient Monuments and Archaeological Areas Act 1979 as amended as it appears to the Secretary of State to be of national importance. 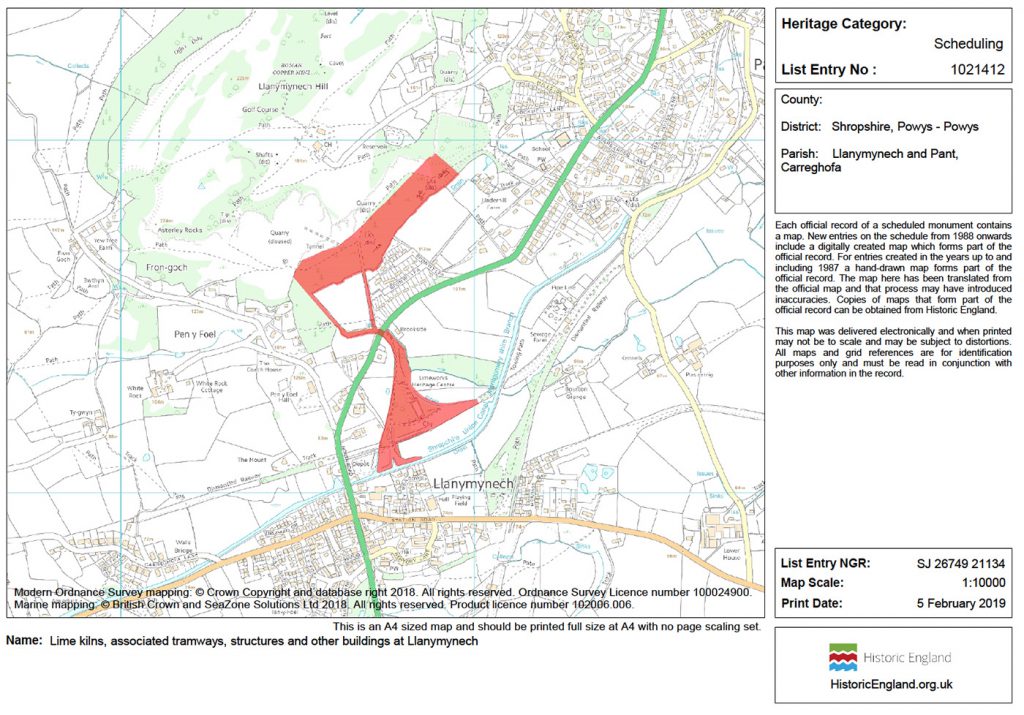 Limestone or chalk has been the basic ingredient for lime mortar from at least Roman times.  Since the medieval period, lime has also been used as agricultural fertiliser and, since the early 19th century, widely used in a variety of other industries: as a flux in blast furnaces, in the production of gas and oil, and in the chemical, pharmaceutical and food industries.  The lime industry is defined as the processes of preparing and producing lime by burning and slaking.  The basic raw material for producing lime is limestone or chalk: when burnt at high temperature (roasted or calcined), these rocks release carbon dioxide, leaving `quicklime’ which, by chemical reaction when mixed with water (`slaking’), can be turned into a stable powder – lime.  Lime burning sites varied in scale from individual small lime kilns adjacent to a quarry, to large-scale works designed to operate commercially for an extended market and often associated with long distance water or rail transport.  Lime burning as an industry displays well-developed regional characteristics, borne out by the regional styles of East Anglia, West Gloucestershire or Derbyshire.  The form of kilns used for lime burning evolved throughout the history of the industry, from small intermittent clamp and flare kilns, to large continuously fired draw kilns that could satisfy increased demand from urban development, industrial growth and agricultural improvement.  Small-scale rural lime production continued in the later 19th and 20th centuries, but this period of the industry is mainly characterised by large-scale production and the transfer of technologies from the cement and other industries.  The demand for mortars grew steadily during the 19th and 20th centuries.  The successful production of mortars made with artificial cement represented an economic challenge to lime production and gradually replaced the use of lime mortars in major construction and engineering projects.  From a highly selective sample made at national level, around 200 lime industry sites have been defined as being of national importance.  These have been defined to represent the industry’s chronological depth, technological breadth and regional diversity.

The lime kilns, associated tramways, structures and other buildings at Llanymynech, together with adjacent Welsh quarries, form a particularly well preserved and complete group of structures relating to a once relatively widespread industry.  In particular, the Hoffmann kiln represents the best preserved example of its type in England and provides an additional component found on very few other lime processing sites.