Llanymynech means place of the monks, local historians now believe, not of the miners, as was once thought.  The first written record of the place name is Llanemeneych in 1254.

Llanymynech Limeworks is a unique heritage area with a history of mining going back hundreds of years.  Llanymynech Hill is one of Wales’ earliest mining sites.  Evidence suggests that copper was mined and smelted here in the late Bronze Age, and that ores were used to make bronze weapons and other implements.  The hill above Llanymynech is crowned with an extensive Iron Age hill fort, which extends over 57 hectares, and surrounds a cave opening known as the Ogof.  The size of this hill fort is probably explained by the presence of the copper mines.  The hill fort would have served as protection for the mine, and housed the labourers employed in the extraction of copper.

It was probably the Romans who first realised the value of the limestone itself.  Limestone is made of calcium carbonate.  When burnt at a high temperature in a simple kiln, limestone is converted into calcium oxide or quicklime, sometimes just called lime, which the Romans used as a fertiliser to reduce the acidity of the local farmland.  Quicklime mixed with water is known as Slaked Lime.  This could be mixed with sand and used as a mortar to hold bricks together in buildings.  Later it was also used as a flux in the making of iron.

Mining and quarrying continued on a small scale at Llanymynech for many centuries but the history of the limestone quarries only becomes clear during the 18th century.  A map of Llanymynech Hill from 1753 shows three banks of lime kilns indicating that limestone was not only being quarried but was being burnt in kilns close to the quarries with the quicklime then transported elsewhere for use.

Some Great walks around the area can be found HERE 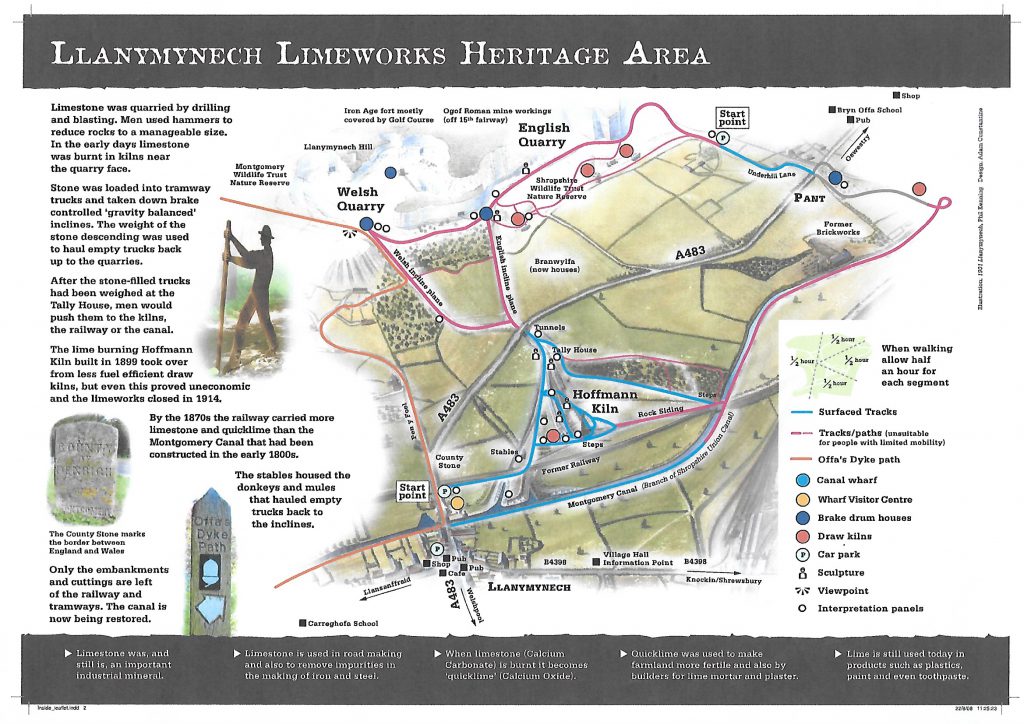